There isn’t exactly a lot of star power up front, either: 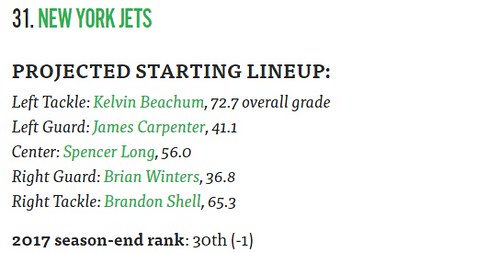 In most cases, a bad O-line usually results in average or poor quarterback play. Especially for rookies (David Carr, anyone?).

Remember that part of Sam Darnold’s pocket poise, though? Quarterbacks, who possess excellent pocket awareness, frequently make the job of their offensive lines easier. Darnold has been following capability to a “T”, showing innate abilities to make throws while being flushed out of the pocket so far at training camp.

“Darnold looked excellent throwing on the run in the goal-line period at the end of practice. He threw twice in three reps, and both throws went for touchdowns. On the first, he executed a play-action fake, rolled right, and hit Dimitri Flowers, despite tight coverage. On the next play, similar stuff — another play-action fake with a roll to the right. Darnold threw on the run and connected with Clive Walford in the back of the end zone. Excellent stuff from the rookie quarterback. He seems to excel at throwing on the run.”

In fact, Darnold’s ability to make passes out of the pocket and on the run was one of his positive traits entering the draft, according to Pro Football Focus.

So if you’re concerned Darnold won’t be able to handle a questionable offensive line, it almost appears as if the opposite will be the case. Sure, there are going to be concerns about how he’ll handle faster, more athletic pass-rushers and a generally lackluster receiving corps. And the Jets could stand some extra vigor in the ground game, hoping former Cleveland Browns tailback Isaiah Crowell can help spark the rushing game.

And all quarterbacks benefit from that.

Still, there’s more than a lot to like about Darnold’s future at the NFL level. Based off reports and the analysis, he’s poised to wind up being one of the marquee quarterbacks in coming seasons.

Proving he’s more than capable of living up to the hype.